Most of the metro area is experiencing a borderline hot afternoon with temperatures in the upper 80s and low 90s. We’ll end the day around 90-91 degrees at PDX. You may have also noticed the haziness out there. Wildfire smoke is drifting out of northern California, and will continue to do so for the next 24-48 hours. Air quality shouldn’t diminish a whole lot, as smoke is mostly confined to the mid to upper levels of the atmosphere.

High pressure will remain parked to the east of us through Wednesday, keeping afternoons hot and a southerly flow in place. Hazy sunshine is anticipated Tuesday, and at least for part of Wednesday. Between Wednesday and Thursday, our upper level wind will turn more out of the southwest, pushing smoke to the northeast. This is around when conditions will start to cool down. Expect highs to trend from the 90s back to the low to mid 80s by Thursday afternoon.

Between Thursday and Friday, a cooler trough of low pressure will make its approach out of the northwest. This system will push clouds back into the picture, as well as showery conditions. The best chance for measurable rain will be across northwest Oregon and western Washington. Points to the south and east of the metro area have less of a chance at seeing a soaking rain. That same system will drop our highs into the 70s Friday-Sunday.

Stay cool out there. Changes aren’t far away!

Anyone named James -- that being a first or last name -- just got one extra reason to visit New York City this year. The hotel James New York-…

There's a dearth of Black players on the LPGA Tour. This woman wants that to change

At the age of 36 Althea Gibson made history after becoming the first African American golfer to earn status on the LPGA Tour. She was also kno…

An Alaskan town has said goodbye to daylight for the next two months.

Today was another fantastic day...as the most consistent/stable weather pattern of the entire warm season continues. Each of the past 8 days in Portland we've topped out between 78 and 84 degrees. Keep in mind a typical high temp this time of year is 80-81 degrees; this is about as normal as it gets folks! Humidity has been low, skies have been mainly sunny, & nights have cooled well down into the 50s. Many would say we are having a perfect summer weather pattern. That's because hot high pressure has stayed to the south, allowing just enough onshore flow to keep us comfortable

Somehow my pool has remained in the mid-upper 70s, even with lows in 40s and highs only 75-80 out there. Must be the constant sunshine each day. We are living through another warmer-than-average August.

Does it seems like late summers have been consistently warm lately? Sure enough, Portland hasn't seen a cool August since 2010! Although 2011/2013 were only a little above average. Of course the Portland/Vancouver metro area has an increasingly warm "urban heat island" at night which leads to ever-increasing nighttime temps under clear skies. But daytime highs (a more reliable indicator of a warming climate in a city) have been steadily marching uphill too. 1940-2020 August high temps at PDX, make sure you click on it for a MUCH better view.

After a slightly warmer day tomorrow, in the 85-88 degree range, we'll cool off over the weekend with more onshore flow. Then a weak upper-level trough passes nearby Monday

Models say we could get lots of clouds and even a few light showers out of this system late Sunday night and Monday morning. I have a feeling the last day of August will feel more like September. But then things heat up again the first week of September. All models agree a flat, but strong ridge of high pressure in the upper atmosphere parks over the Pacific Northwest. You can see the very warm ridge on Tuesday's 500mb chart...this is the pretty one we use for TV. The ECMWF ensembles say summer is coming back the first 7-10 days of September. Check out the rain outlook, little/no chance for rain through the 10th, after the showers this coming Monday 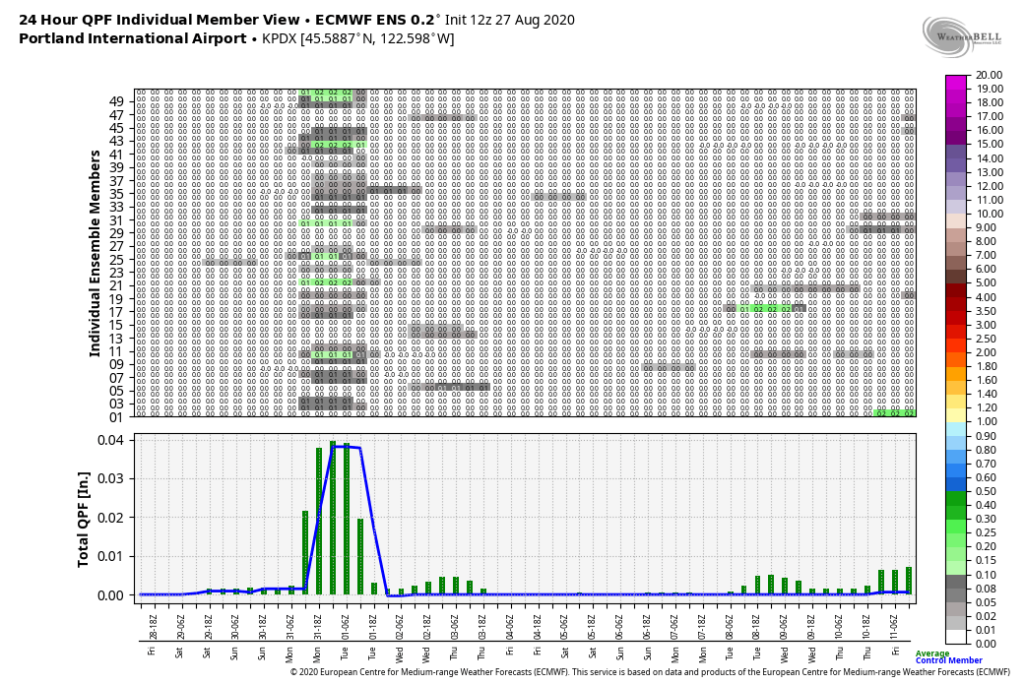 And the surface temp forecast shows 10-15 degrees above average daytime highs. The Euro, GFS, & GEM all hint there could be some sort of heat event during this period. I mean several days at/above 90 degrees. At least hot weather in September is accompanied by much cooler nights than July and early August!

The Woodhull Medical and Mental Health Center in Brooklyn is where an 86-year-old woman with dementia died.

Meghan McCain is pregnant and self-quarantining

"The View" co-host announced Sunday that she and her husband, Ben Domenech, are expecting their first child together .

PORTLAND, OR (KPTV) - A landslide on West Burnside will continue to lead to road closures through the weekend.

Days of Our Lives logo