4 Ways to Use Landscaping to Increase Your Home's Energy Efficiency

Reduce your power bills by putting your outdoor spaces to work.

Most of the metro area is experiencing a borderline hot afternoon with temperatures in the upper 80s and low 90s. We’ll end the day around 90-91 degrees at PDX. You may have also noticed the haziness out there. Wildfire smoke is drifting out of northern California, and will continue to do so for the next 24-48 hours. Air quality shouldn’t diminish a whole lot, as smoke is mostly confined to the mid to upper levels of the atmosphere.

High pressure will remain parked to the east of us through Wednesday, keeping afternoons hot and a southerly flow in place. Hazy sunshine is anticipated Tuesday, and at least for part of Wednesday. Between Wednesday and Thursday, our upper level wind will turn more out of the southwest, pushing smoke to the northeast. This is around when conditions will start to cool down. Expect highs to trend from the 90s back to the low to mid 80s by Thursday afternoon.

Between Thursday and Friday, a cooler trough of low pressure will make its approach out of the northwest. This system will push clouds back into the picture, as well as showery conditions. The best chance for measurable rain will be across northwest Oregon and western Washington. Points to the south and east of the metro area have less of a chance at seeing a soaking rain. That same system will drop our highs into the 70s Friday-Sunday.

Stay cool out there. Changes aren’t far away!

Round #2 of Summer Heat Arrives Sunday

I’ll make this a brief post and get straight to the point since it’s a weekend:

Today is another beautiful early summer day! Just some spots of morning clouds that gave way to sunny skies. Temperatures will rise into the lower 80s. A perfect day; I took a bike ride in the western Gorge, then did a little garden work.

The upper-level ridging (warm overhead atmosphere) strengthens quite a bit tomorrow. The ECMWF ensemble average of heights at 500mb shows 588dm almost up to Portland. The colors represent anomaly…red is higher (warmer) than average, blue = cooler.

That’s “hot” territory for us. Typically 90+ for an afternoon high in P-Town in that case. 850mb temperatures climb up to around +19 to +20 (C)…that also leads to 90+ degree days down here where we live. The icing on the cake is weak offshore flow tomorrow, and at least the first half of Monday. This shuts down any cooling off the Pacific ocean; our natural air-conditioning is turned off inland. The WRF-GFS cross-section (I’ve circled the easterly wind) shows that, although the GFS has been faster pushing onshore flow in here Monday afternoon than the Euro and Canadian models. The terribly written S, M, & T refers to Sunday/Monday/Tuesday. This typically isn’t a 100 degree setup, but it can get close! 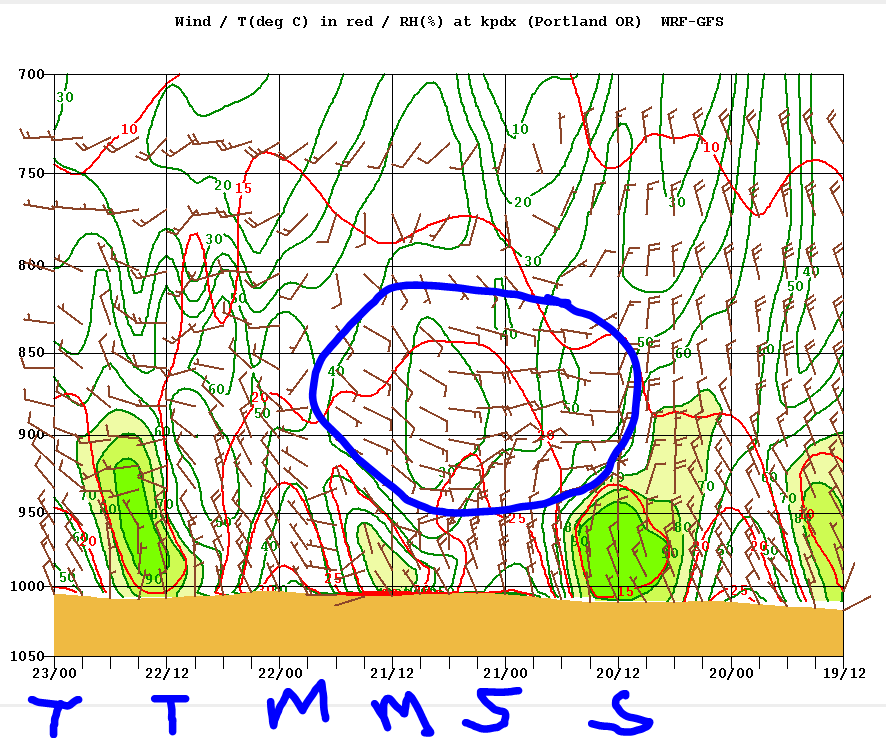 We’re going with 93 tomorrow and 97 Monday, we’ll see how that plays out. Anything beyond 95 will make it the hottest day of the year. By Tuesday, the ridging has weakened quite a bit and the upper-low to the south is sending thunderstorm moisture into central/eastern Oregon.

That will end our little “mini-heatwave” #2 of the summer. I think I better start keeping track; I thought we might finally get a cooler summer. Apparently not.

Now if you look at that map above, notice warm colors still cover the entire PACNW Tuesday afternoon. Yes, the hot weather is mainly gone, but heights are still well above average for late June. Temperatures will only cool down into the upper 70s and lower 80s next Wednesday/Thursday. Now check out a week from now…Saturday the 26th…Wow!

A massive, scorching hot upper-level ridge directly over the Pacific Northwest. This is the ensemble average…the “operational” ECMWF model has even higher heights around 597dm. Both are major heatwave material, likely INTO the 100s. This is still a week away, but all models look similar. Just like everything has to be “perfect” to get a snow/ice storm here, it has to be just right to go into the 102-107 range. The ECMWF ensemble 850mb chart is nuts. Blue line is operational model, red is average of all 51 members, each member is a thin black line. This shows a peak around +20 or +21 on Monday, then the average next Saturday is around +24. For reference, PDX has never been above +28, or technically the sounding over Salem has never reached above +28. Notice the red line is well above average (green line ) through the end of June. 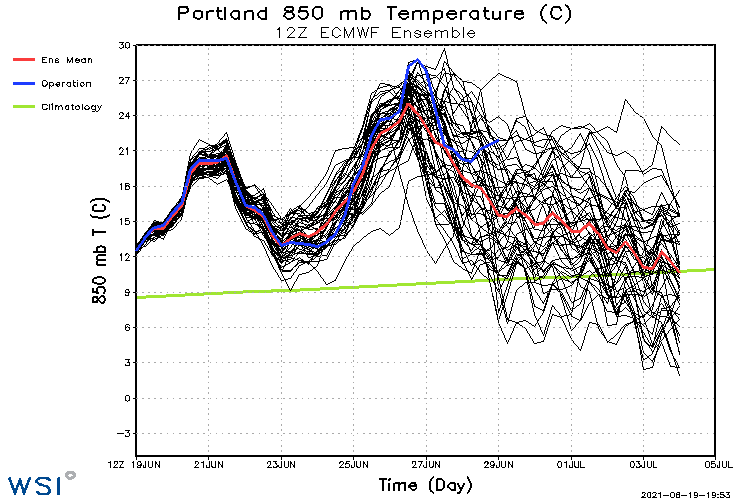 For now the screaming message is that warm to hot weather is here to stay through the rest of the month. I’ll be back at work Monday.

A Big Taste of Summer...In April

What a weekend it has been! Both days in the 80s west of the Cascades, no rain, sunny from sunrise to sunset, and not much wind either. Must be mid-July right? No, just mid-April.

Portland ended up with these numbers the past three days…

A marine push of cooler air arrived on the central coast yesterday, but didn’t make it the Astoria and Long Beach until early today. So a few spots hit 80 yesterday up north, but ALL areas were much cooler today. Newport couldn’t even make it to 50. Keep in mind that in these situations proximity to the ocean determines how warm a location gets. Newport’s observations are taken at the airport, very close to the beaches. Yet Tillamook airport is quite a few miles inland = warmer when the marine layer is very shallow. Just a few miles inland at Toledo it was around 70 degrees today.

Typically I’d expect lots of that marine air to pour inland tonight. Then, since it’s so early in the season, we’d wake up to low clouds and afternoon highs only reaching to 65 or so tomorrow. But while we do have some marine air pushing inland this evening, a fresh round of “cool” and dry Canadian air is surging south through Eastern Washington. This is due to an upper-level disturbance moving down the back side of the warm ridge we are under. There was a gusty WEST wind in the Gorge today with the onshore flow, but by tomorrow morning models tell us we’ll be back to 3-5 millibars EASTERLY gradient. Expect gusts 30-50 mph at Vista House the first half of the day…quite a change. Spokane’s airport just reported blowing dust and a squall this hour as the late season “arctic front” passes by. Strong northeast wind is spreading south quickly this evening. So we’re back to a mild easterly wind tomorrow = no marine push and/or low clouds. Of course we’ll still be a bit cooler, but 10-12 degrees above normal instead of 20-22 above. To summarize, we have three more beautiful days, just some high clouds at times. That will give us 11 totally dry and mainly/all sunny days. Extremely rare in April! Check out that slow temperature rise since the cool/showery 53 degree day on Saturday the 10th

It’s back to onshore flow and a cooler atmosphere Thursday through next weekend…back to normal. We’re going for this right now. Typical late April weather for next weekend.

Of course, we badly need rain, it’s now officially the driest spring (at this point) we’ve seen in Portland since at least 1940. The ground is chalky dry in my garden; although I see the woods still have moisture an inch or so below.

How much rain is ahead? Enough to wet things down for sure, but we could use a nice 2-3″ over the next two weeks to start soaking the ground again. ECMWF ensembles say most likely it begins Saturday and continues off/on through the end of the month. So wrap up your deck-staining and other outdoor activities this Thursday/Friday and assume we’re headed into a wet period.

So is this very dry spring unusual? Yes, of course. But this isn’t a trend we’ve been seeing in springtime. In fact we’ve been turning just slightly WETTER west of the Cascades in springtime compared to 100 years ago. I just checked the entire NCDC Oregon Climate Zone #2 (western valleys) for March-April-May precipitation. This average ALL climate stations in the lower elevations westside. The last three years have been a bit on the dry side, but not excessively so.  One thing to keep in mind, we still have 6 weeks of “spring” left and a May soaker could make up for this very dry start.

What about temperatures? Here are spring temperatures for this same western lowlands climate zone. What really sticks out is the cyclical stuff; we go through several years of cool/wet springs (2008-2012), then warmer periods. The last 8-9 springs have been above average…we haven’t seen a “cold spring” since 2012. That’s good for gardening, but as we know, it can be bad for summer fire season. Also notice temperatures have NOT been rising dramatically at all during this spring period. Winters are warming, summers are warming, but not much with spring…so far.

That’s it for now. Enjoy a few more bright days with more comfortable temps than we’ve see the past two days. Eventually the cool showers WILL return.

Fast-food chain KFC has launched a new Intel-powered games console that comes with a built-in "chicken chamber" to keep your snacks warm.

Warm Up with Our Favorite Hot Alcoholic Drinks

When the weather turns cooler, it's time for hot mixed drinks. Here you'll find our favorite warm cocktail recipes to thaw you, including spik…

2021 Bathroom Design Trends That Will Be Huge Next Year

Transform your bath into a restful retreat with these practical but stylish surfaces and fixtures.

8 Hot Tea Recipes to Curl Up with This Winter