It finally rained today!  Not exactly a soaker, but saw just about as much rain today as we’ve seen in the past three weeks…it’s been very dry. 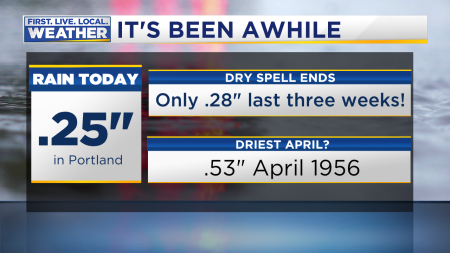 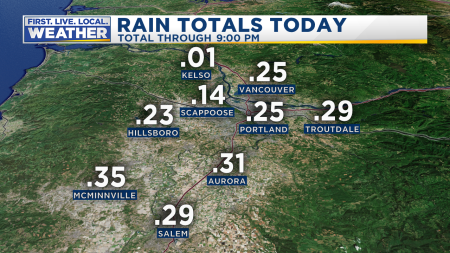 The first 20 days of April were the driest “start” to the month since 1990; very unusual to only see 4 days w/measurable rain in the first three weeks of the month!  This graphic is for the 1st-20th

It appears this is just the start of several showery days.  A warm front brings a few sprinkles Friday, then another wet system comes in Saturday morning.  We’ll likely get another 1/4 to 1/3″ rain out of that one.  Models are showing a 3rd system moving inland Monday with another 1/4″ or so.  If we get lucky maybe we’ll see a weekly total of 1″ here in Portland.  That’s long overdue.  Still, as you see above we are running well below normal for just April.  February & March were dry as well.

So get used to lots of clouds, a little bit of sun at times, and some showers the next five days.

By the way, I’ve been showing a “film” on this evening’s shows from April 22nd 1961.  On that date it snowed in parts of the Portland metro area.  I bet it wasn’t cheap to own a quality color film camera in 1961!  But Ronald Myers did; the film shows snow in Washougal

It’s interesting that snow only covered non-paved surfaces…tough to get anything to stick to “warm” pavement the last week or so of April. 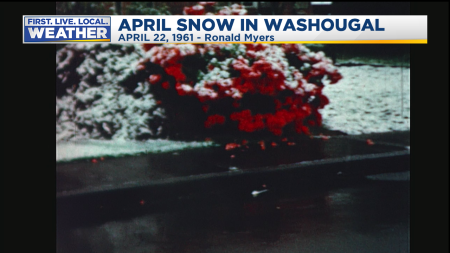 I checked the weather records from PDX for that day; a LOT of precipitation (.95″).  The low was 33 and high was 43…extremely cold for this late in spring.  I’m guessing it was a stalled post-frontal precipitation band.  If it was a “showers/sunbreaks” day it sure would have been warmer than 43 at PDX in the afternoon since 850mb temps were around -4.  Freezing level in the morning was way down around 2,000′ or a little below.

I’ve been busier than normal the past two weeks since we started some “Mark Knows” weather lessons in the evenings.  These are 15-minute Facebook live postings covering different topics that kids (or adults on Happy Hour) might be interested in.  I’m off the next three days, but next Monday we’ll talk earthquakes.  Tune in to my Facebook page (@marknelsenweather) 7pm Sunday.

Stay dry and enjoy the rain…we need it!