I’m on vacation this week (at home for now), but we’ve got some serious fire weather ahead. First, while I’m standing in my kitchen about two hours ago, my wife’s phone gets an emergency alert. It came in with a blaring tone like a civil emergency or Amber Alert. 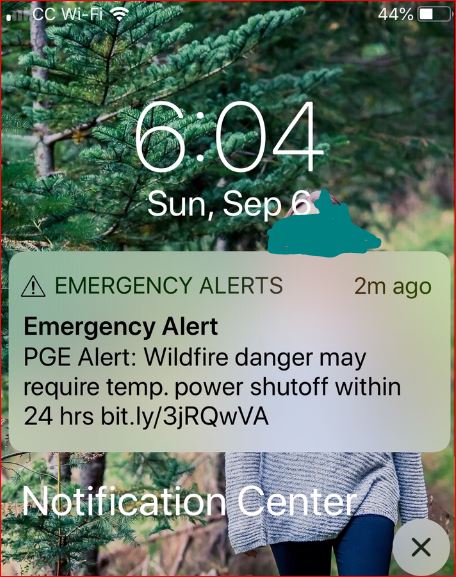 Other than the crisis of her phone having less than 50% charge, what does this mean? Power may be shut off in 24 hours? My phone didn’t receive this alert, but hers is probably pulling from a cell tower closer to Mt. Hood.

This is a first, I’ve never seen a situation where PGE has considered de-energizing power lines to avoid forest fires. Indeed, they have the “Hoodland Corridor” (east of Sandy to Welches to Government Camp) under this possibility 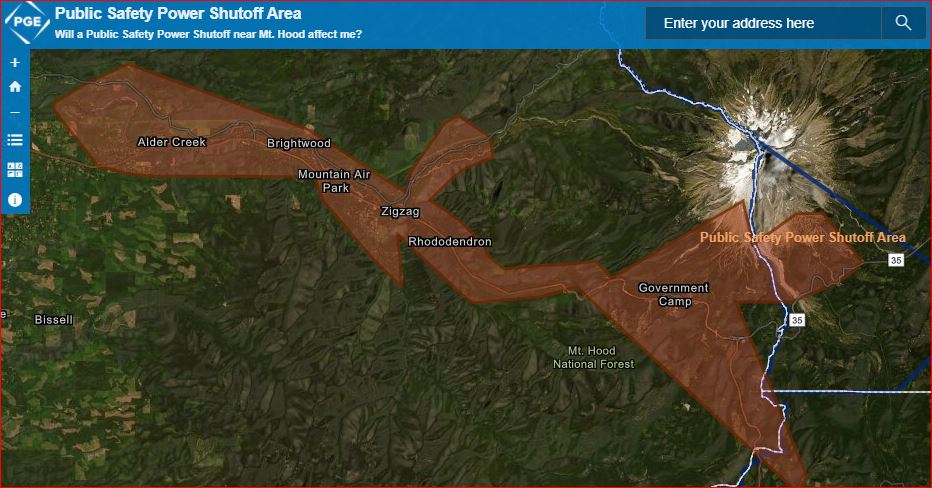 They are taking the proactive step after seeing what can happen with high winds, low humidity, and extremely dry vegetation. We’ve seen it in California the past couple of years. We get gusty easterly wind sometimes in September, nothing unusual, but this time is different. MODELS ARE FORECASTING A “HISTORICALLY STRONG” EASTERLY WIND EVENT BEGINNING MONDAY EVENING AND CONTINUING THROUGH TUESDAY

I’ve never seen a high wind setup (for the foothills and Cascades) this early in the “Fall east wind season”. This is unusually strong even for November/December, but this hasn’t happened when forests are still totally dry and humidity will be extremely low. This could be a once-in-a-quarter century type of event. I haven’t seen it in my 29 years forecasting here! The Storm Prediction Center has our area under an “extremely critical” fire threat; I don’t think I’ve seen that either 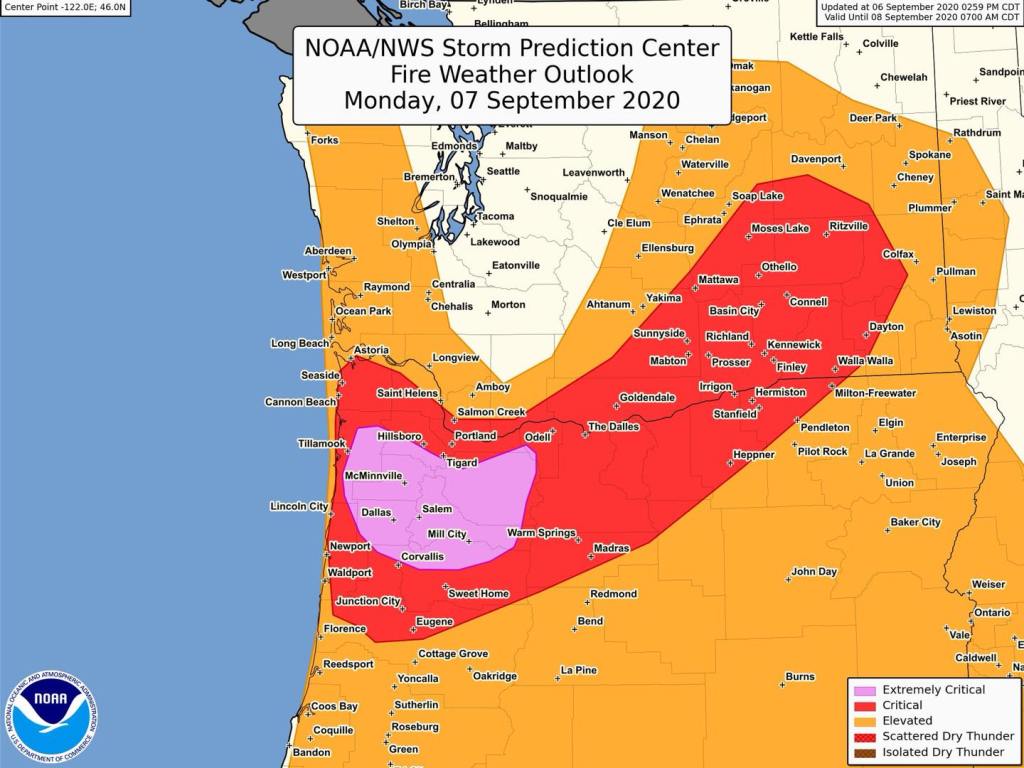 WHAT YOU CAN DO THE NEXT 2 DAYS

I won’t spend too much time on the technical details. We have a hot ridge of high pressure over the West Coast right now. Temps are running about 10 degrees above average and more like +15 coming up tomorrow. A 597 dm high is VERY hot. With offshore flow that could put us close to 100 degrees. But we had onshore flow today

The upper-air pattern becomes highly amplified (briefly) Monday night and Tuesday. An early season cold airmass digs south into the Rockies, doing a “drive-by” of the Pacific Northwest. This is 8pm Monday. That’s quite a setup, hot airmass along coastline and cool fall weather coming down through Idaho. This general pattern is perfectly normal in September/October, but this is an extreme version of that pattern

By Wednesday the hot upper high is back over us…other than fire weather the big story is a continuing hot/warm pattern through NEXT weekend.

To show the contrast between the “cold” airmass coming in to our east vs. the hot to the west. Take a look at 850mb map for tomorrow evening 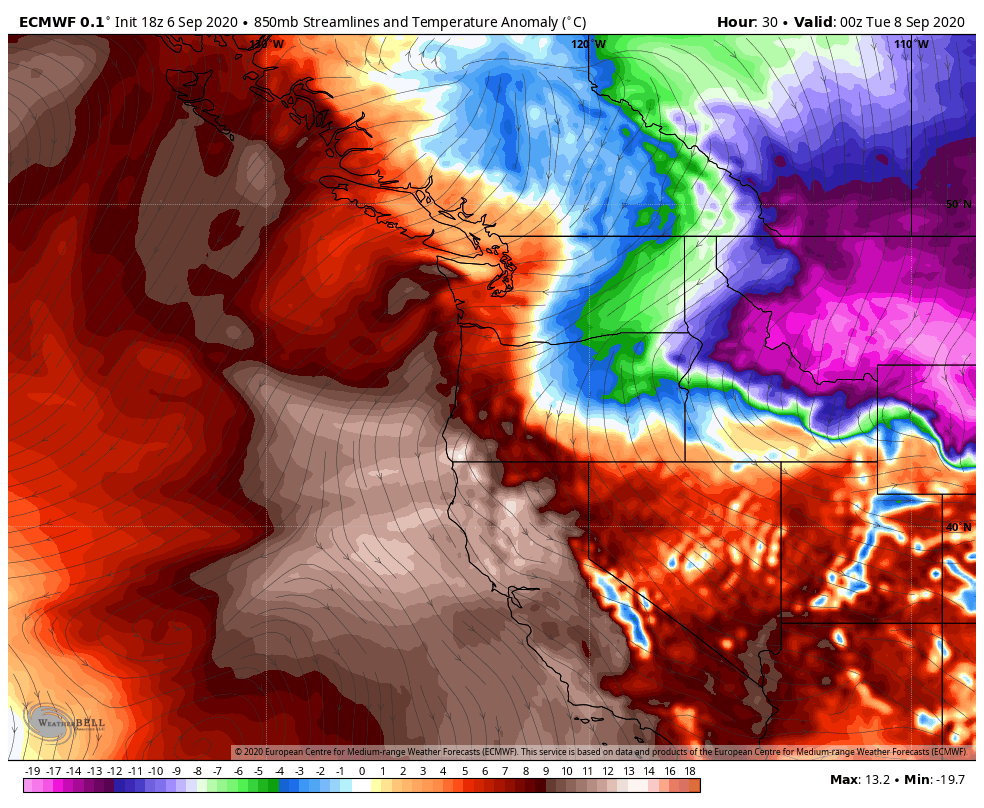 About 35 degrees BELOW NORMAL at 5,000′ over Montana, yet 12 or so ABOVE NORMAL over the Oregon coastline. That’s a tremendous thermal gradient. So a dry cold front will push south and west across the Pacific Northwest tomorrow afternoon-night. You see the arrival in the WRF-GFS cross-section over Portland. Right around 00z tomorrow (5pm). 60-70kt wind speed around 3,000′ over Portland. That’s amazing; I’ve never seen that in September/October, and it’s very rare anytime in the cold season. So we’re in a bit of uncharted territory here. For example, how much of that strong wind will “mix down” into the valleys?

The same model shows the benign wind conditions at 2pm tomorrow. Northeast wind is just arriving at The Dalles and northeast Oregon. This is what we would call the “arctic front” if it was winter; the sudden wind switch to easterly. Note these are calculated wind gusts, not steady speed.

Also note (in red) the 8-9 millibar easterly gradient across the Cascades; I’ve never seen that in September either. Right now there are two large fires burning in NW Oregon. One north of Detroit (Beachie), and one large one (Lionshead) just east of Mt. Jefferson. Imagine what could happen with either of these fires the next 48 hours. Not good..here’s the Beachie fire this afternoon from folks at Willamette National Forest 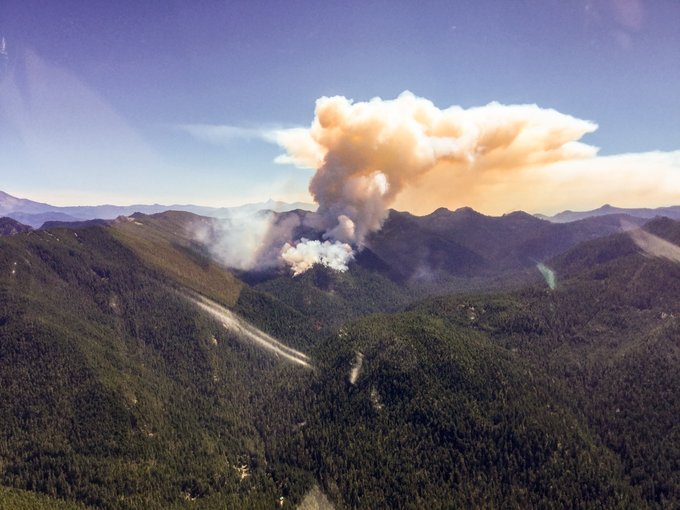 So, meteorologically we’re about to see something very rare for this time of year. IF we don’t get any large fires, it won’t go down in history as something that interesting for regular folks. But of course if we get one or more large fires, we’ll all remember!